VoIP During a Power Failure – How to Keep Connected 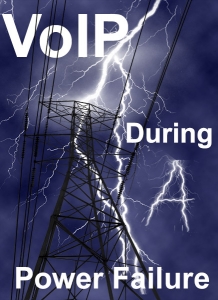 I want to start by validating a common fear that people and businesses have about switching over to VoIP.  If your power fails, so does your VoIP service.  This occurs since VoIP phones rely on your own electrical supply.  Power failures do happen and your best defense is being prepared ahead of time.  Here’s the good news: there are some relatively simple and cost effective ways to keep your service running during a power failure.

In the old days of landline service, home users and small businesses could still have working phones in the event of a power failure –assuming the phone lines weren’t also interrupted (say, by a fallen tree).  Landlines connect to a central office before they branch off elsewhere.  Each central office is typically equipped with a huge array of batteries (which are backed up by generators) to keep the lines powered during a power failure.  This is only useful if you have independent corded phones.  A typical business PBX system would still fail without backup power.

What can your business do in the event of a power failure?

There you have it.  While I certainly hope that you won’t experience another power failure, these things do happen.  The good news is that, now that you’ve read this article, you’ll know what to do if it does happen.

Have power outages been a concern? (Perhaps a reason why you haven’t yet switched to VoIP?)

If you’ve experienced a power outage, how have you managed your calls?